While in high school, Doug started working for his dad learning the family restaurant business.  After college, Doug decided to 'try something different' but soon found himself wanting to operate his own restaurant.  Doug's story begins in 2001 when he and his wife, Melissa, bought Little Pigs Hickory Smoked Bar-B-Q & Catering at Hudson Corners.  Although Melissa had not grown up in the business, she soon found herself falling in love with the excitement of owning a restaurant and being part of the community.  Not long after, Doug and Melissa found themselves pregnant with their first daughter, Caroline, followed by Grant and then Sarah and lastly, but certainly not least, little Jackson.

It's an unusual day if you don't see either Doug or Melissa at the restaurant - Doug on the 'block' chopping meat and Melissa behind the counter greeting customers.  For Doug and Melissa it's much more than serving up good barbecue - it's about a place where families can come together and experience fun, laughter, and good food.  So come on in!  Dine with Doug and Melissa and savor the taste of good old-fashioned barbecue with a dash of southern hospitality.  See for yourself why Little Pigs Bar-B-Q at Hudson Corners is one of Greenville's favorite BBQ restaurants. 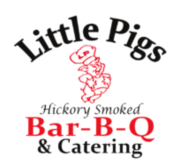 Get Your  Gift Card TODAY!

Get Social With Us